The swimming pool with no restraints

Solar pool ionizer, which may also be referred to as a swimming pool mineral sanitizer, typically uses copper and silver ions to eliminate bacteria and algae in the water. Silver ions are more instrumental in removing bacteria, while copper ions play a bigger role in preventing algae.

Solar pool ionizer purifier collects sunlight through its solar panel, and then converts it to low-voltage electricity. It uses solar technology to generate a safe, low voltage trickle feed of solar generated electricity to ionize the minerals copper ions into the water. In order to restrain the growth of algae and microorganisms.

Solar pool ionizer is a new revolutionary water purifier for the Algae-free and Chemical-free operation of your swimming pool. Solar pool ionizer still eliminates algae and bacteria, but doesn’t have so many negative sides. 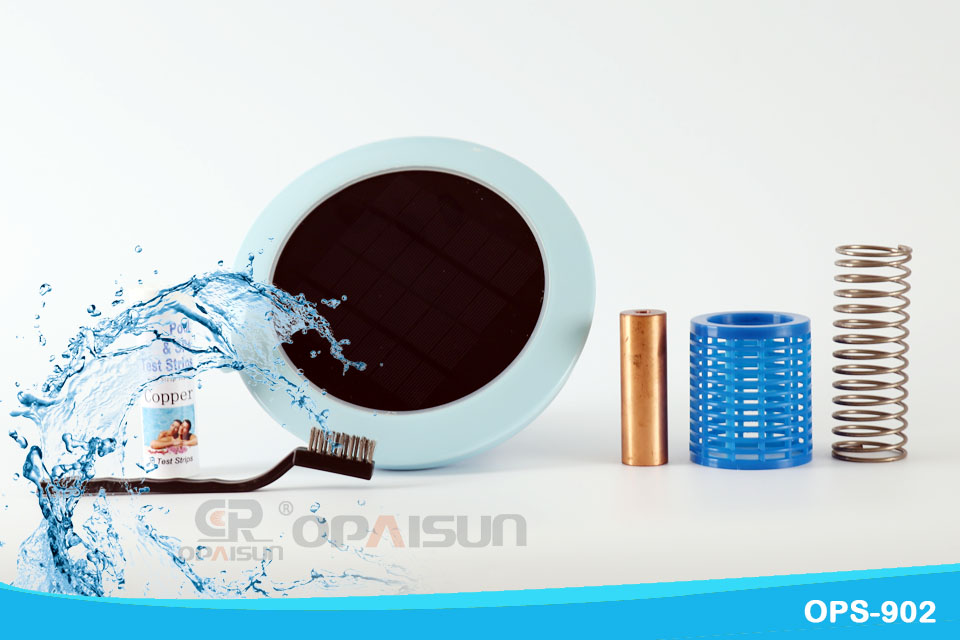 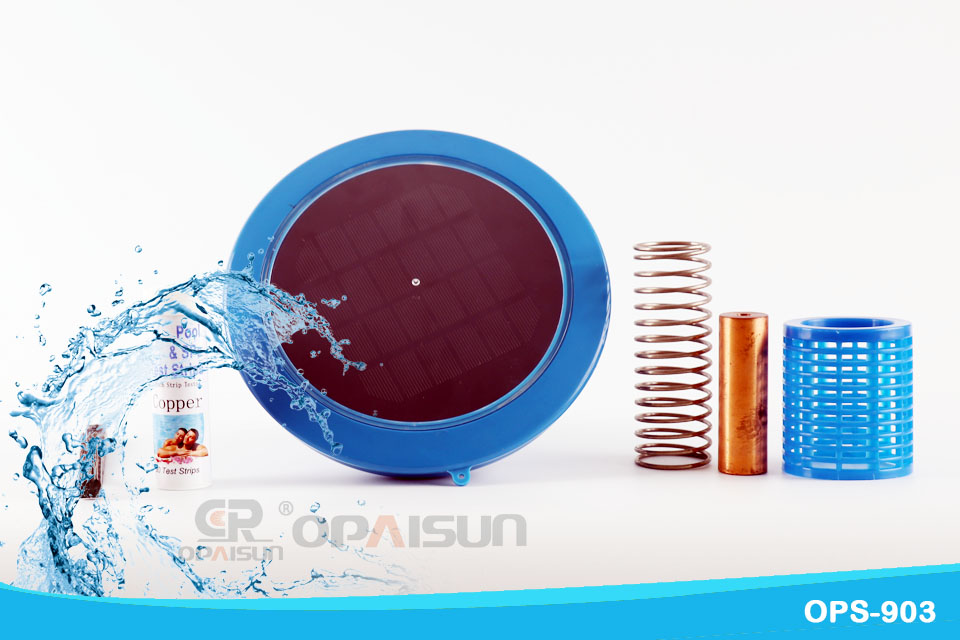 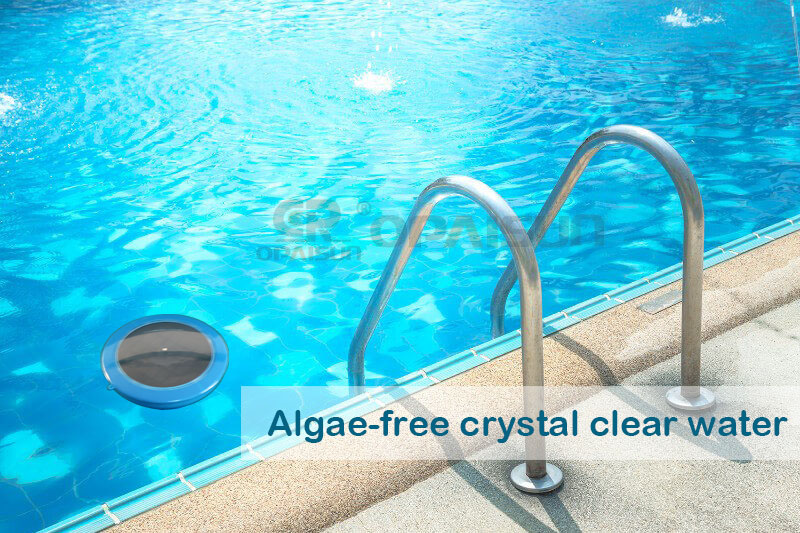 While the solar pool ionizer purifier is floating on the water, the solar panel converts sunlight into electricity. This completely harmless low-voltage electrical current powers a Silver-Copper mineral alloy electrode below the waterline. This causes the release of mineral ions into the surrounding water that easily spread throughout the pool. Once the water has reached an optimal level of ionization, it will efficiently prevent the growth of microorganisms without the need to use chemical agents.

Some contaminants in your pool, such as dust, suntan lotion, body fluids, etc., are not affected by minerals. A build-up of these substances tends to cloud the water and therefore requires a minimal amount of chlorine to dissolve them and keep the water crystal clear. You can reduce the chlorine level by up to 85% with respect to the usual amount used, also providing you with significant financial savings in maintenance costs. 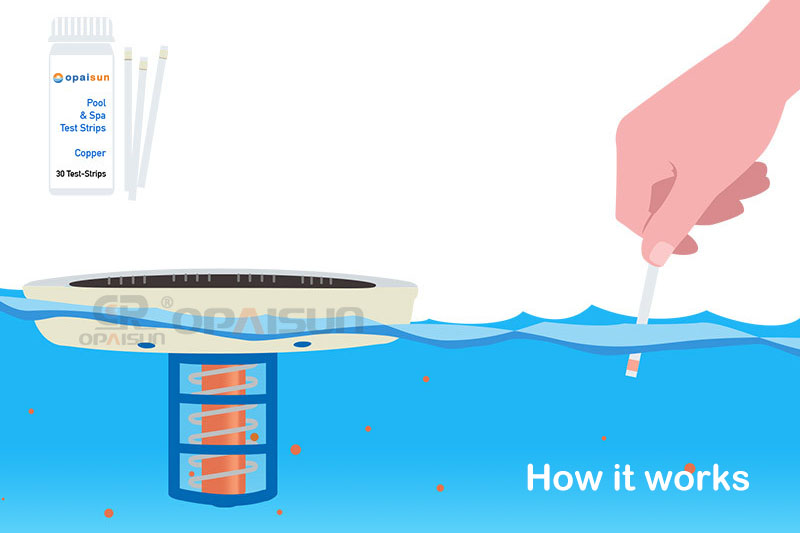 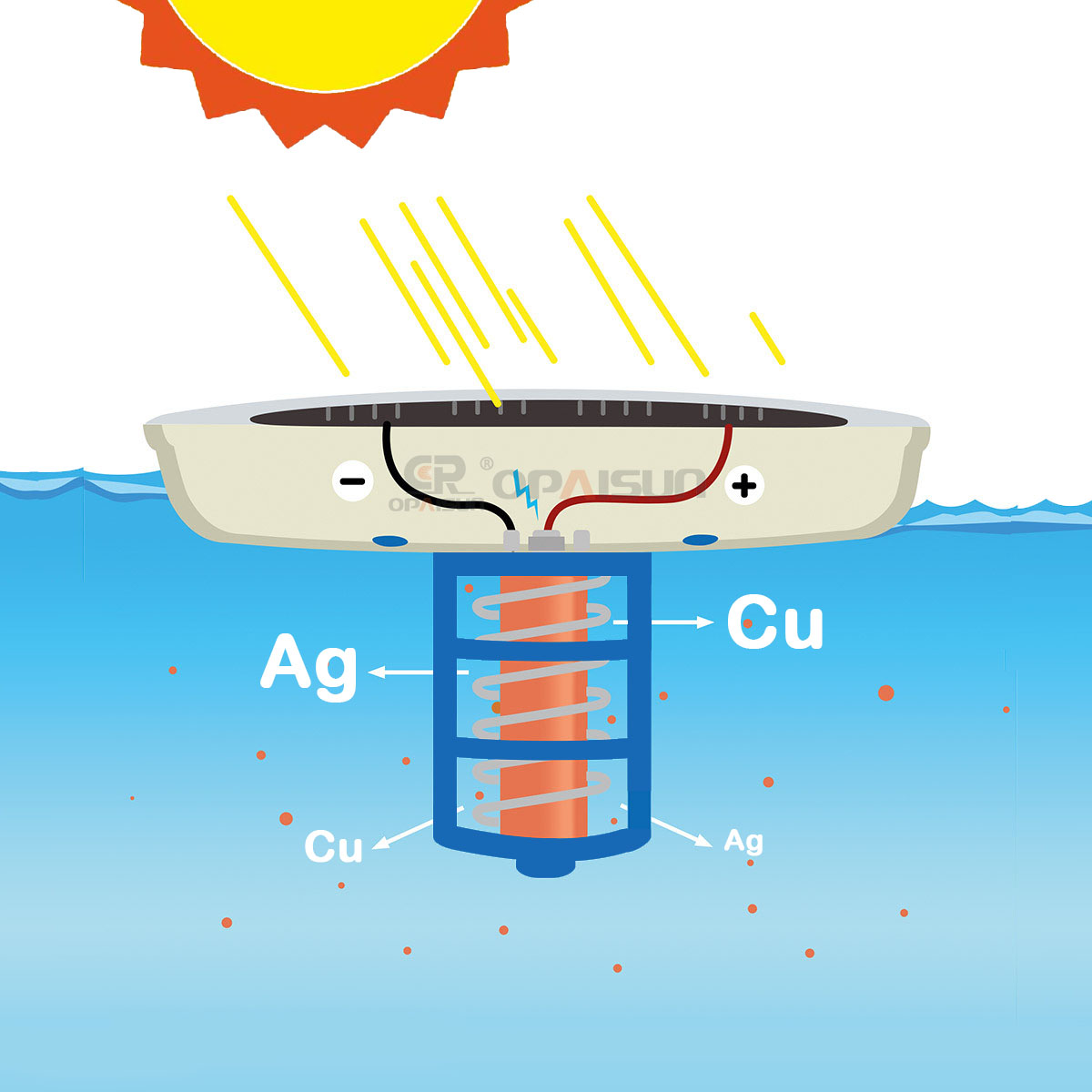 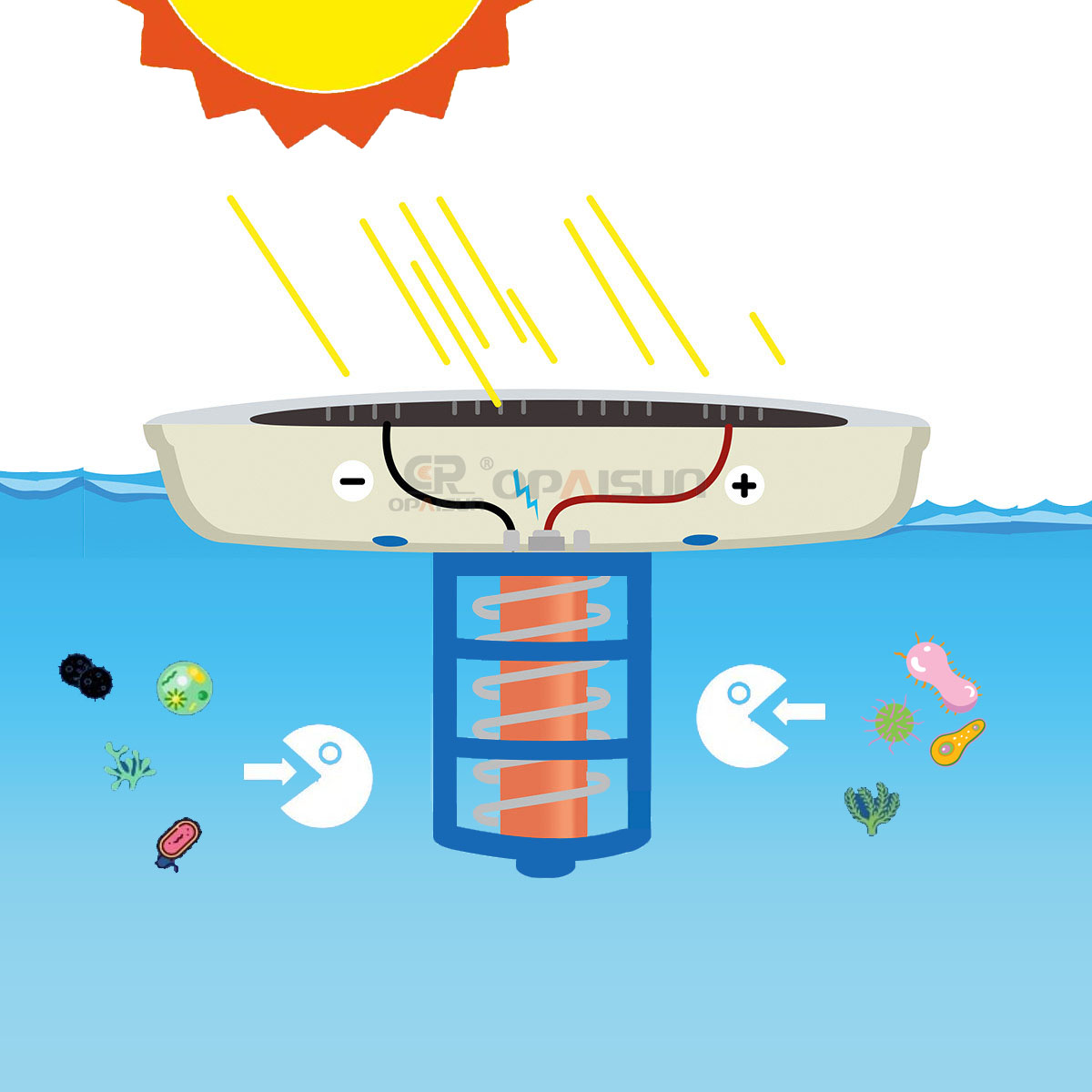 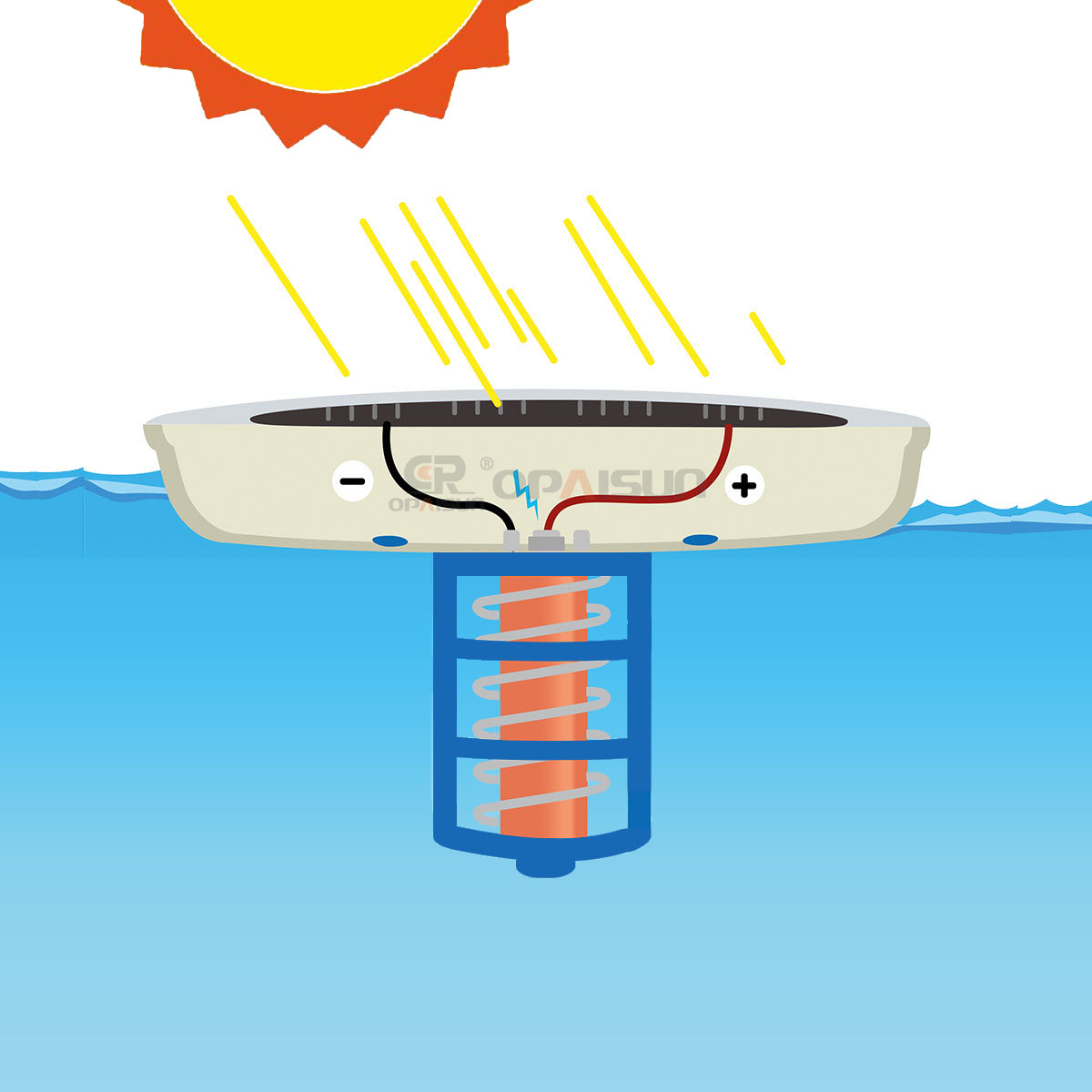 Solar pool ionizer purifier up to 80m3 of water, it is perfect to eliminate viruses, bacteria and algae. Solar ionizer also helps to reduce the use of chlorine in your pool by 70%.

Step 1: Let the ONOSI Solar pool ionizer simply floats in the pool, make sure it under the sunlight.

Step 3: The Ionized water could inhibit the growth of microorganism and algae in pool. The solar pool ionizer also collects undesirable minerals such as calcium and iron. It has the effect of softening your water. 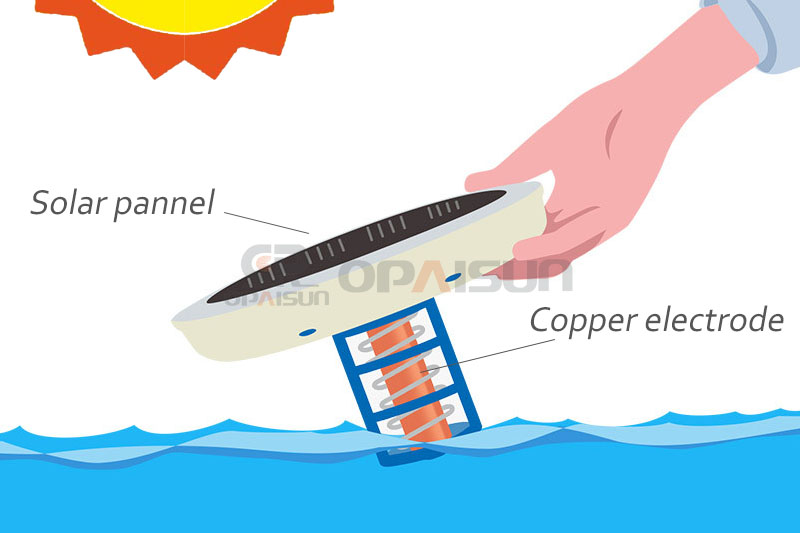 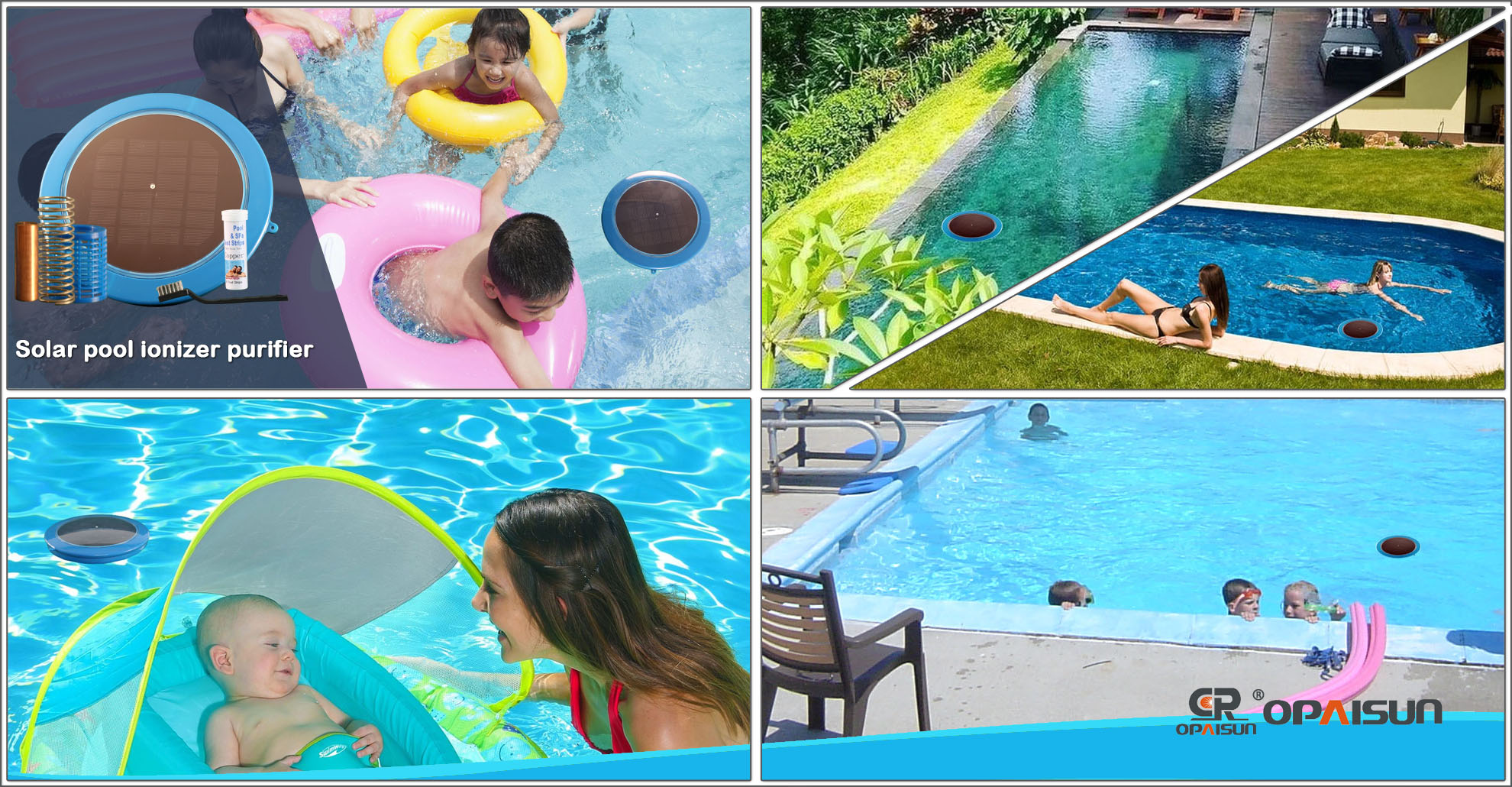 This is a process in which an element acquires or loses electrons. The ionization of copper is the result of the discharge of copper ions.

How does the electrode work?

When the atoms of the copper electrode are ionized, the copper ions will diffuse in the water, and the effects of these ions on the microorganisms are fatal.

How does copper ionization purify water?

Copper ions penetrate the protective outer membrane of algae and bacterial cells, destroying the balance of enzymes, inhibiting the growth and reproduction of bacteria, and cleaning and disinfecting water.

How long does it take to reach the effect?

It depends on many factors and usually takes 2 weeks.

How often should perform a maintenance?

It is recommended to clean the electrode once every one week using the brush supplied with the kit.

No need to install, just take it out of the box and put it in water.

Should you continue to use chlorine?

Yes, because some contaminants (such as sunscreen) still make the water turbid, so a small amount of chlorine is needed to keep the water clean and clear.

Need always put in the pool?

Yes, unless the water quality status shows ‘too much copper’, but this possibility is almost non-existent.

Will it leak water?

Solar pool ionizer purifier is very tightly sealed and generally does not cause water to leak into the interior and cause the water droplets to condense (unless there is a break).

Solar pool ionizer how it works It uses solar technology to generate a safe, low voltage trickle feed of solar generated electricity to ionize the minerals copper ions into the water. In order to restrain the growth of algae and microorganisms. Kill Algae and Reduce the need of Chlorine. Save your time for Algae-scrubbing. While the solar pool ionizer purifier is floating on the water, the solar panel converts sunlight into electricity. This completely harmless low-voltage electrical curre......